Skip to content
Home/Facebook, Review Management, Social Media Management/Vision, Algorithms, and You
Next

Vision, Algorithms, and You 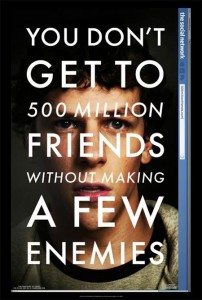 “What’s on the internet is written in ink.” So says Erika Albright, the ex-girlfriend of Mark Zuckenburg about half way through the amazingly good “The Social Network.” The Wahine went to see this movie last night, and while I’d read the reviews, I really didn’t know what to expect. If it weren’t for the Wahine, I probably would have waited for the movie to come out on DVD. But here was a movie that was at times funny, smart, intriguing, tantalizing, well directed, well acted, and just downright good. And Justin Timberlake as Sean Parker? Fricking brilliant!!

And whatever you might say about the actual story– it was over dramatized from what actually happened, some of the characters didn’t really exist, there WAS no Erika Albright—the story was a lesson. While “with great power comes great responsibility” can sound trite, it doesn’t make it any less true. Mark Zuckerburg as played by Jesse Eisenberg– brilliant, visionary, distractible, OCD—can see taking a social network to a level that no one else could even dream of, even with the existence of mySpace and Friendster. But how well would any of us, at the tender age of 20, handle this creative brilliance? How many of us could handle the responsibility of connecting millions of users through a single interface and NOT make enemies, lose friends, and generally screw it up in one way or another? Not many I think. As portrayed in the movie, the reason that Facebook is free to all of us today is because it’s “cool,” – and that’s something that Zuckerburg was desperately wanting to be. In the process he created a tool that everyone knows today and is used around the world, lost his best friend, learned hard lessons, and continued to stay true to his original vision…being cool.

Fast forward to today. In 2003, “facebook me” was just starting as a catch phrase, the purview of college kids and the new internet generation. Now even my Mom is on there. My MOM, people! Yeah, lots of people still use it for checking out the opposite sex and seeing their relationship status, but it has evolved, and I think it’s evolved beyond what even Zuckerberg imagined. It’s a tool, it’s a meeting place, heck it’s where I found out what the specials are at my favorite restaurants. A place to upload and share photos, sometimes a place to find out way too much information about someone (have you seen Failbook?), a place to play games with friends and strangers, and a place to connect, which is really what it’s all about, isn’t it? It’s a way to talk to a large audience in a personal way. And if you’re not using it as a platform to communicate with your audience, you’re missing something. You’re missing the marlin folks (watch the movie – that last comment will make sense).