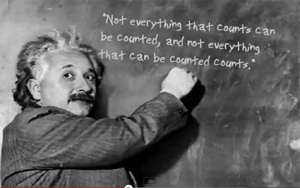 At business dinners and post conference meet-ups, we’ve found ourselves on the people mover gliding from “Yes, but what’s the ROI of social media?” to “I’ll only do social media if somebody can show me an ROI.”

Ironically, it’s the old-school marketers who seem to agonize over the metrics of social media, and whether an accurate ROI can be produced from this unwieldy and new world wildness. To them we pose this question–where’s Waldo now? Do you know the ROI of your existing marketing efforts?

Your Yellow Pages Ad, Direct Mail pieces and Tradeshow Booth. If you know the exact ROI on these three, awesome. You’re ahead of the game. Most have no clue.
Things We Should Ask The ROI Question About Before Social Media – Scott Stratton/UnMarketing


So is Scott right–do we hold social media to a higher standard? Yes? Well, alrighty then. Let’s let social media light the way.

In our last post What’s the ROI of social media? What’s the ROI of an elephant?, we discussed qualitative metrics — how to measure conversation and the less tangible actions in social media. We showed you various ways we track metrics to prove performance. In yin yang fashion, in this post we’ll go over some thoughts about quantitative measures. Yes folks, pop a few M&M’s to power up your brain because this means math!

As tempted as I am to dog ROI purists who tear up at hard numbers, the truth is hard numbers matter. Increased conversation and traffic are great, but frankly only big bank deposits are going to blow smoke up any CFO’s pant leg or skirt and CFO’s deserve love too!

Simply put ROI using social media marketing is no different to any other ROI – IT IS A VISIBLE DIFFERENCE IN YOUR BOTTOM LINE. It’s about how you slide people into your sales funnel. FULL STOP.
Understanding Social Media Marketing and Return on Investment (ROI) – Steve Buchalter

Watch me pull a ROI rabbit out of my hat!

Investment: What you’re putting into it vs Return: what you are getting out of it

Certainly you jest Karen–it’s got to be more complicated than that. Yes, actually it is in the sense that it is rarely a straight line, but before we go further can you answer a few quick questions for me?

ROI is your gain from your investment.  Where’s Waldo before you started the social media campaign vs where’s Waldo after?

The formula is REVENUE MINUS INVESTMENT, DIVIDED BY INVESTMENT (expressed as a percentage)
Calculate Your Blogging ROI in 9 Steps – Jay Baer/Convince & Convert

Fasten your seatbelts for this 5 minute ROI wild ride with Adam Price and Brad Bogus of Speak Social. It’s our favorite crash course!

The tangible way to value your social media is through dollars and cents. This is done by comparing the cost of social media against any gain in income which would be attributable to it.  I’m going to show you two ways that you can measure social media efforts, depending on how detailed you want to get. The first is the overall gain (or loss) in income over a year when social media is used. This is very straight forward, but doesn’t take into account outside variables. The second focuses the lens a bit more and shows how you would measure a specific action in social media over a specific period of time (Oliver Blanchard style). The first formula used to calculate your social media ROI is as follows:

If we put actual numbers to the above formula it would look something like this:

This is a simplistic and static model but gives you a framework. Remember, your ROI is not simply the percentage increase in net income from year to year, but rather the comparison of your net income against the cost of creating that net income. In the above example you see that it cost you 18,000 in social media to create 32,000 in net income. So you were able to make twice in income, what it cost you to generate that income.  That is a nice little return for your money.

In the second formula, I’ll have to admit it’s going to spin your head a little so hold on. We’re going to be looking at specific social media efforts over a specific period of time, measuring the same outcomes. This would be more appropriate if say, you were a business who runs an annual event, and this year you want to use social media to promote it. This year, instead of printing invitations, you e-vited or managed the RSVP’s in Eventbrite and instead of radio ads or newspaper ads, you hired a social media management firm to use Facebook and Twitter to spread the word. You can measure the ROI of your social media efforts of this year’s event by comparing it to last year’s return. Remember, you’re comparing the SAME efforts (advertising/promoting), not the overall budget, and SAME outcomes (profit in dollars).

Here are the variables in this instance:

Different strokes for different folks. What does success look like to your company? From brand awareness, establishing yourself as an expert in the industry, reduction in support costs, or driving traffic to your site and to sales — different strategy, same methodology.

Bottom line is we see social media moving the needle and that my dear Al, is what really counts.

HOW TO: Calculate the ROI of Your Social Media Campaign – Mashable
Follow @mashable

The Power of Like: How Brands Reach and Influence Fans Through Social Media Marketing – comScore, Inc
Follow @comScore


The ROI of Social Media: 10 Case Studies – The Next Web
Follow @tnwsocialmedia


And last but definitely not least Gary (and we think “THE GREAT”) Vaynerchuck sharing his thoughts on convincing companies of social media ROI:
Gary Vaynerchuck: On Demonstrating Social Media ROI Interview by Bryan Elliott of Behind the Brand TV
Follow @garyvee

About the Author: Karen Weikert