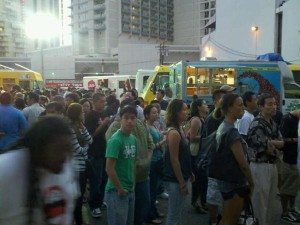 I was watching a program on TV the other night about how facebook has effected so many people since it’s launch a little more than 5 years ago. In particular, how president Obama had utilized facebook to practically win the election, how he has over 18 million followers today, and how if it were not for the impeccable timing of how viral facebook became at that time, he may not have won. Today, millions of people are connected on facebook, not to mention, millions of people are connecting and sharing on hundreds of social media sites like facebook, twitter, linkedin, youtube, yelp, and sumbledupon,to mention a few. This new revolution of new media, as analysts describe it, is the new way that the world is connecting. Peer to peer is the new avenue for news, marketing, business transaction, fund-raising, family picture sharing, and just about everything that less than a decade ago was anything but.

I first heard about “Eat The Street” when I was invited by my friend, Lisa-Maria Priester, who I know through my boyfriend Jae who has worked with her husband, Sean Priester for many years and most recently at his new restaurant “Soul”. By the way, Soul just won the Hale ‘Aina Award for best new restaurant in Honolulu. I was invited by Lisa-Maria through facebook events. Being a food lover myself, I gladly accepted the invitation, and decided to attend the event on Thursday night.

I first showed up at 4:15, as the facebook event said it started at 4pm, but there was only a few trucks parked there, and was not much going on. I assumed that since this was a first time event that it was going to be a fluke. I found Poni of Street Grindz there, who was the coordinator and creator of the facebook event, and told her that the page had said it stared at 4. She was surprised to hear this, and said that the event was really to start at 6pm. No big deal for me, but she quickly got on her smart phone to make the changes, and I decided to hang out in the area and come back at 6. Still, I was not expecting much. So I hung out and took a nap in my car.

When I returned a couple of hours later, I was blown away. The few trucks and empty lot was now a dozen trucks and hundreds of people, if not at least a thousand. As I walked into the event, I saw Poni and she was quick to apologize for the confusion and I was thanked for returning. I asked Poni how she promoted the event, and she said that she was just overwhelmed and baffled at the turnout, and that she had promoted the event on Facebook and Twitter, and she had some shout-outs on a radio station by a friend. It was at that point that I turned around, gazed at the ridiculously long lines, huge and astonished crowd and said, “wow, so this is what social media can do”. I witnessed a plethora of people taking pictures and videos to be instantaneously posted on their facebook, tweeting their reactions and reviews of the event and food they waited in line so long to try, and people conversing and sharing their awe and amazement of the turnout of this event.

I don’t think there was anyone who expected this event to be so big.

I instantly started tweeting. I wanted anyone who was not here to be able to live this experience the best they could through my tweets. I took pictures, reviewed the one food vendor I could bear to stand in line for, and spent the rest of my time talking to people and asking how they found out about his event. 90% of their answers: facebook, twitter, or a friend told them.

After some time my daughter of 17 months was not having the excitement anymore, and I had to leave. But this experience left me with my first-hand experience of the physical power of a digital gathering place. So many times I have read about or seen on TV how social media sites have connected people who never thought they would meet at all or again, helped raise money for causes that were close to individual’s hearts, win elections, and allowed friends and family to instantly see each others’ thoughts or “status”. Heck, I even ventured into the business of social media recently, selling the power and importance of an online presence for businesses. Of course I have always been an advocate for the power of the internet and social media – but it was not until Thursday night that social media sold me, just as devout Christains are born again, I am now a “believer”.

Oh and just to make my point, here are some links about the event, and articles posted after: