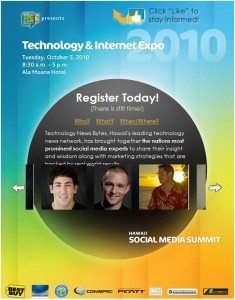 We’ve all been in meetings or at conferences where you look around and half the room is eyeing their iPhone or their Blackberry under the table.  The could be Tweeting or FB’ing or even sending a “legitimate” work email, but whatever it is that they are doing, it has to be hidden.  So it was refreshing to be at yesterday’s Social Media Summit with the Wahine and have everyone not only Tweeting and FB’ing all day, but to be ENCOURAGED to do it, and even given the words that would fit into the Twitter 140 character limitation.

Here were a group of amazing individuals who didn’t just EMBRACE social media – they live, breathe, eat, sleep, swim, dance, jump and generally RELISH social media.  Honestly, because I am into social media myself, I had anticipated that the Social Media Summit would have at LEAST 500 people in attendance.  Social Media is where it’s at right?  It’s how businesses find new customers, how non-profits connect with their clients and donors, how start ups connect with people to grow their business.  Right? RIGHT?  This group definitely thinks so, and sees social media as not just a trend, not just something that’s here today and gone tomorrow, but a true cultural shift that will change how humanity interacts.

Some of us apparently haven’t gotten the message yet.  There were about 200 people at this conference, and we were all there to learn – not only HOW to do social media, but how to do it better, more efficiently, how to make it part of the culture of our businesses.  The speakers were, in general, smart, connected, and completely willing and wanting to share their knowledge.  It felt like being in a room full of women who were comparing their fabulous shoes, telling each other how much they cost and what a deal they got, and saying to each other “You have to have these, they would look SO GREAT on you!”  Social media can look SO GREAT on everyone – and it is CHEAP, CHEAP, CHEAP, especially as compared to traditional marketing tools.

This was a conference I walked away from saying “dang, I got a lot of information” combined with “holy crap, I don’t know ANYTHING.”  But here’s the beauty of social media – it’s okay to not know anything, as long as you’re willing to learn, cause there’s a heck of a lot of people out there who are willing to teach.  Here’s a few:

andybeal.com – Online Reputation Management – something we all have to think about these days